So, being a bleeding edge geek that I am, I decided to jump on the Apple’s attempt at “cloud” music. BTW, I really hate the world “cloud”, but that is another story all together. Anyways, since my music library is only around 8000 files, which is way under the 25000 allowed in iTunes match, I figure, I should give it a try. 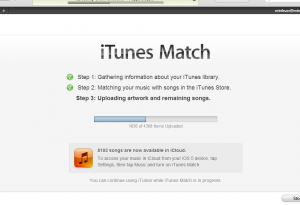 The iTunes match is a 3 stage process. 1st it gathers information about the music library, then it matches the library with the iTunes “cloud” library. Finally, uploads the remaining non-matched files to the “cloud”.

So after stage 2 of the process, you can actually start using the iTunes Match. So here is the catch, as soon as you enable the iTunes match in your iPhone, it erases all of your existing music library on the phone. What people (Apple) don’t tell you (clearly), is that iTunes match relies very heavily on the network. Your entire library is in the cloud, so as far as I can tell right now is that it streams and caches on your phone/ipod on the fly. The cache is cleared after a while. So here is the bad part, if you are on a long flight or somewhere where there are no network access, you are screwed. No music for you.

I hope I am wrong, but this is what I see so far. I thought initially that iTunes Match is part of it, you can have both music stored locally and iTunes match from the “cloud”. But that doesn’t seem like the case. Well… I will update as I learn more, but for now, I will probably turn off iTunes match when I go on my international vacations. You know, Apple really annoys me sometimes.