A day at the Museums

Today was a Museum day. It is our second day with the museum pass and our second to last day in Paris and France.
The day started off with a visit to Orsay – The line outside is around one hour long .. However, we have a museum pass and no wait.

Inside Orsay it was pretty awesome, I was amazed to see the real version of a painting that my parents have at their place. I have to say Orsay was an interesting art museum. After a few hours it was time to move on.

From there we walked along Champs Elysees toward the Arc De Triomphe. We stopped by a small side street greek food restaurant and hand lunch. The owner was interesting, when we told him that we were from Washington state in the US, he says oh… I have a relative in Washington DC. I guess, that is a common mistake. DC and Washington state are not the same :).

Afterward, Vicky spent some time shopping on Champs Elysees while I just people watched and got some interesting street photo.

From there we marched on toward Arc De Triomphe. It was pretty funny, we could not find the tunnel to get across to the arc, but when we finally do get there, there was a 30-40 minutes line… however no waiting with museum pass .. yeah!!! The steps going up to the top of the arc was long but worth it. The view on top was great!!!
After the tower, we decided to head back to Notre Dame to take pictures of the gargoyles, but unfortunately when we arrived, they close the line already. We were not able to get up to the tower… This is something for the next trip, i guess. Note to self, Notre Dame line closes at 4:00 pm. Since, we can not make it up to the top of Notre Dame, we got some ice cream on the island and headed toward the Louvre.

The Louvre also had a long line, but with the museum pass… no line!!! yeah!!! Once again, people every where especially all the famous paintings and exhibits.

After the Louvre, it was time for dinner. We bought some things at the super marche next to the hotel, however, I thought it was a good idea to get some cheap French Chinese food. Well, it was not cheap and the food was not good at all… another learning experience.

So Tomorrow.. is new years eve… and my last day in Paris.

We have one of these at home in Auburn

Stairs on the bridge across the river

Stair in side the Arc!

Back at Notre Dame

The Mona Lisa and Min Part 2

The Mona Lisa and Min 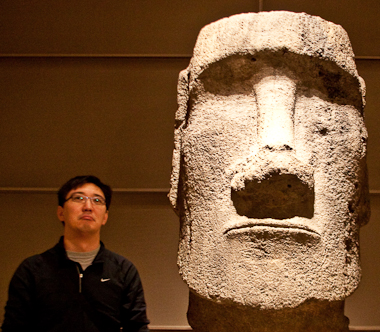 Outside of the Louvre