I bought an iPad 2 not too long ago. I really do like almost everything about it, but every so often I wish I could use a pen to draw on my iPad. After looking online and finding that typical products
Such as

Box Wave’s stylus with a build in pen

These stylus are around $15 to $25 dollars.
So I decided to look for a cheaper DIY solution.

After doing some researching, the popular method is to use conductive foams. This is the same method used in the different commercial pens listed above. The make magazine produced a very popular video about making your own conductive foam iPad stylus.

I digging through my garage, and did find a small piece of conductive foam, in my pile of electronic stuff, but the foam was harder to locate then I first expected. 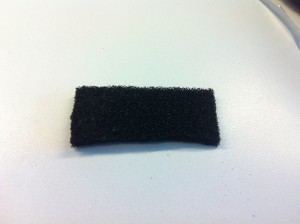 Even with my small piece of conductive foam, I was not able to produce a reliable stylus, it seems that all conductive foams are not created equal, and my particular foam is not very conductive and hand a big problem of fading in and out. This made the use of the DIY stylus useless.

Then I found this one from Japan, of using static bags and other conductive bags to make a stylus.
http://www.youtube.com/watch?v=vHhB2BF5yQM

I did tried to make the U-tip stylus with a chip bag, and it did work… sort of, still very inconsistent and it was difficult to keep the u piece flat and when the pen is not vertical, then it would not register. Still looking for a better solution.

So before I finally give up, I decided to make my own modification to the Japanese design. So the following is my version 1 of the Poor man’s iPad Stylus.

Starting with static bag material and a pen. I decided to use the backend of a pen, this way I can use the pen as a regular pen (this is similar to the Box Wave’s stylus). 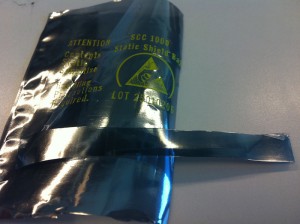 I cut a small strip of static bag material. the strip needs to be as long as possible and a little bit wider than the pen. This way you can tilt your pen slightly and still maintain contact. 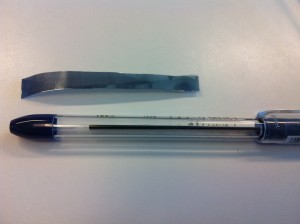 First, attach the strip to tip of the pen, in a J shape as shown below with tape. 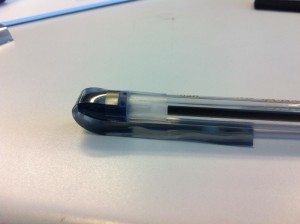 Second secure the other end of the strip with tape. I recommend putting an additional 2 strips of tapes on the side of the strip to secure it.
CAUTION!!!: make sure the tape don’t cover the static strip completely, in order for the stylus to work, your hand will need to be in contact with the static strip at all time. 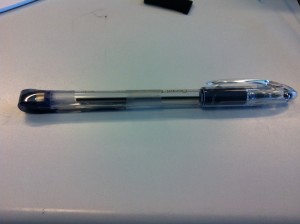 And that’s it… check out the video to see how it perform.

Caveats:
– The pen seems to not work as well with screens with screen protective films.
– Make sure that the hand is in contact with the static strip at all time.