So I don’t know what got into me yesterday, but I guess it was because of the awful AT&T services in my area. I cannot make a continuous call on AT&T’s 3G in my area without call drops. This is not only my problem, but everyone that I know with AT&T 3G service in Maple Leaf area. But anyways, that is not what this post is about.

So it’s been 2 over years since I moved to Seattle, and I’ve been thinking about moving my 509 number to a local 206 number for home, however, I never felt the need to do so. However, as weeks and months go by, I started to realized that I almost never use my land line a.k.a my home phone line or my plain old telephone service (POTS). So I’ve been thinking about dropping the service. The problem is that AT&T have such poor service in my area that I can not just depend on my iphone, no matter how awesome it is, I still need to have a home number. but $20+ dollars a month just to hold a number is pretty pricy. So here comes my solution…

At one time I have 2 lines with packet8, when I cancelled the 2nd line, the analog telephone adapter (ATA) from 8×8 was not returned. I have a bit understanding about VoIP so I figure since Packet8 uses SIP (Session Initiated Protocol), I can probably use the same ATA to point to some other SIP provider and get by really cheap. I’ve also already have a Google Voice (GV) account, so if I can link my google voice to my home phone that will be just wonderful. The following is what I found I can do and what is my plan. 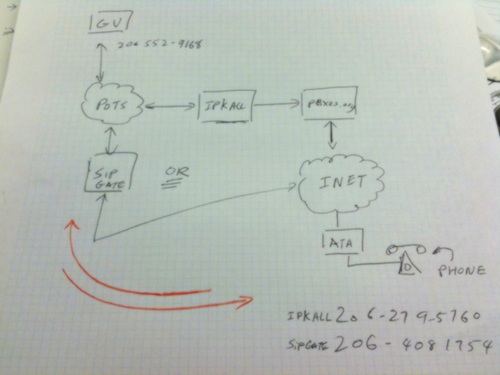 The following are my steps and comments…

1) I know that I want to use GV as my home phone number, However, I need GV to point to an actual number since GV does not provide a physical phone service yet. One option is to use Gizmo5, but since they are being integrated into GV that is currently not an option.  So I register to SIPgate for a free account.  The advantage of a SIPGate account is that they provide a free 206 number and also they do not charge for  incoming calls.
Check out this article.
http://www.voip-news.com/feature/how-sipgate-one-stacks-060509/

2) The second step is to convert my DTA-310 ATA from packet 8 into a usable ATA. After reading online and playing with couple of different firmwares, this is what worked for me
– Downgrade to packet 8’s firmware version 1235 (sip1235unl.bin)
– From there load the leadtek firmware version AR171 (sip_bva8051s_ep1_voi86171.r0)
… it took me many tries to find this version of the firmware. Look in DSLreport for the firmware if you can’t find it in the archives.
– once load is successful, make sure you reload and restart the DTA-310 by using the reset button.

3) Once the new firmware is loaded it should look like this.

4)I found this site to help fill in the configuration. Use the SIP credentials in sipgate under settings to fill in the configuration. your sip-id is also the sip number in the DTA-310 configuration. Also make sure to change the server to point to sipgate.com. So after I finished this configuration, I was still unable to connect to the sip server until I configured the STUN server settings. (http://en.wikipedia.org/wiki/STUN) STUN= Simple Traversal of UDP through NAT. By configuring this server setting, it let you get back the local firewall. This is also the reason why we need to install the AR17I version of the firmware. The Packet8 1235 firmware also has a SIP server configurations page, however it does not have STUN settings. Only the Leadtek firmwares have those settings.

5) Finally, reboot the DTA-310 ATA and check to see if it is registered with SipGate. You can use Sipgate to test the connection.

6) Since I am using GV # as my primary number, I changed the outgoing caller ID within SIPGate to my Google voice number. and forward all google voice calls to my SIPgate number.

Comments: Ok, I know that the title states that it is free.. well it is free for all incoming calls to SIPGate, however out going calls will cost 1.9 cents per minutes. But if you really think about it, for 9 bucks, it will give you around 450 minutes of talk time. So typically, those unlimited VoIP services are charging for 9 dollars a month. While SIPGate is a pay as you go solution.

Comment 2: There are also concerns about replacing land lines with this service without 911 services. Well, that is not entirely true. SIPGate do offer E911 service for $1.90 per month. That’s not too bad for a peace of mind.

Comment 3: SIPgates offers few other things in additional to GV, such as Free online FAX and they also provide additional phone number for a price.

Ultimately, it is a pretty cool deal… by using the GV frontend, when google finally allows SIP connections, it will be a very seamless switch over from SIPgate to all google. Gosh I am such a google fanboy… So this afternoon, I will go get me a DECT 6.0 wireless phone for my new home phone setup. Yeah!!!

Oh … and if you look in the diagram above, yes there is an even cheaper alternative shown it my hand drawn diagram, by using IPKALL and PBXes.org. More on that method maybe later.

UPDATE 01/2011 : I’ve been having some problems with SIPGATE on dialing out. I have an Apple Airport Extreme wireless router. Unfortunately it doesn’t handle the VoIP/SIP traffic properly and it doesn’t support UPNP so after 30-45 seconds into an outgoing call. The call will drop. I have two options.

1) Replace the Aiport Extreme with a much more standard wireless router where I can configure the firewall/NAT better.

2) I’ve been using my google voice to dial out, which basically calls me first and then calls the other person. This is also what make it a free land line.

UPDATE 10/2011 : I’ve updated my router, so I did take option 1 from above. I’ve also starting to have a humming issue, after a long trouble shooting it was determined that the power supply was causing the humming and causing phone issues. after moving the power supply and replacing it, that fixed the problem.

UPDATE 10/2012: For anyone else that  is thinking about using their Google voice as their voice over IP services… save your trouble of doing anything I’ve shown above… unless you really want to learn and hack… just purchase a OBi 100 ATA or OBi 110 ATA.  It is under 40 bucks and you are up and running in minutes.  less stress less trouble. 🙂

UPDATE 9/2013: Since Sipgate has shoutdown, I am now using an alternative.  Instead of going through sipgate and forwarding number to google voice, I am using YATE (Yet Another Telephone Engine) as my own gateway to Googlevoice.  If you don’t want to host your own, you can use Simonics‘ free service.  But be warned, that they require you to provide your google username and password.  Use Google’s 2 factor authentication just to be safe.  I will write a post about YATE at a later time when I have time.