So… let’s talk about some retro audio.
About a year ago, I picked up a set of Bose 301 Series 2 speakers. Yeah, these speakers were pretty good back in the 70’s and the early 80’s. I faintly remember my Dad’s friends having one of those and everyone was wow-ing around the speakers. (This was back in Lafayette, Louisiana in 1985). So, I had these speaker for a pretty long time and I just have not had a chance to use them or anything to power them. I’ve been looking for a receiver to power the speakers, but I really did not want to spend 100 to 1000 dollars for a receiver to power my little cheap ass 5 dollar speakers. So… my search continued for a while. But after talking to my AV buddies at work, they said that they had a very old receiver that I can use. Last night, I got the receiver and finally hooked it up.

The receiver I got was a Pioneer SX-550. I think it was a middle of the line receivers in the late 70’s. Well.. it matched well, with my 5 dollar Bose speakers. To bring this setup to the modern age, I connect the receiver speaker setup to my Apple Airport express and feed it the music from my iTunes.

Yep, ultimately, it did not sound too bad at all, and the best part is I can control everything from my Iphone 🙂

Yeah… If I have an Apple TV that would be nice too.. 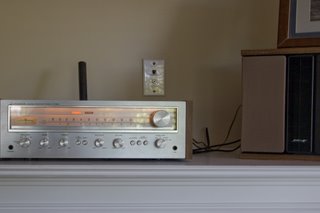