OK… This is one of the coolest technology thing that I have done in a while… Aside from all the stuff at work. Anyway, my D-Link DI-614+ has been acting up lately. BTW the DI-614+ is a home gateway router with 802.11b wireless built in. I bought it about 2 years ago. It is actually been a pretty good little box. But anyway recently, it has been acting up, I see my interfaces on my computer dropping in and out and my Packet8 phone was also dropping. At first I thought it was the cheap internet phone dropping, but then I realized that my computer was also dropping and the DI-614+’s M2 light would blink and the device resets. I know that was not a good sign. After upgrading the new firmware on the DI-614+ and realizing that it still isn’t fixed, I decided to get me a new home router. So I spend 65 bucks and got me a Linksys WRT54G. Yep an 802.11g router. But wait… there is more. This router is 100% hackable. Which means, you can put your own firmware on it and make it in to a linux box. COOL!!!!!

Well… this is what I decide to put on my Linksys WRT54G.

some of the features are listed in this site.

But I will just highlight some of the features for you.

You can telnet to the WRT54G box… neat …but pretty useless.

Advance Wireless features… meaning… I can boost the output power of this WiFi AP. COOL!

predefined Server ports… yeah… Linksys should have had this one in their default load.

no longer do I have to use my windows box to act as a VPN server. This little box will do it all!!!

Anyway… it is also an router… if you want there is another load that actually lets you do OSPF and BGP. Humm… get couple of them and use them to study the concept of OSPF and BGP… ha ha ha!!!!

ok… I guess I should include a picture right? 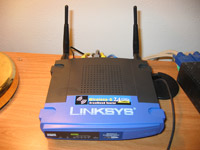