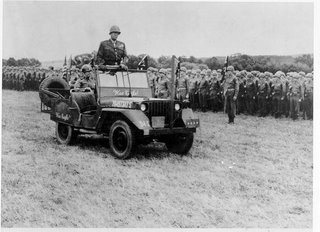 Why does George S. Patton?’ Jeep have “War Eagle!” written on it? There are several possible answers. “General Patton was stationed at Fort Benning and apparently liked Auburn football,” said alumnus Pete Turnham, who served under Patton during World War II. “I have been told that he said he wanted his troops to fight like those fighting Auburn Tigers.” Turnham “also heard that one of Patton’s aides was an Auburn man, and he sold the general on Auburn.” Another theory is that Patton’s driver was an Auburn fan. Still another is that Patton was simply using a subordinate’s vehicle while he inspected units of the 301st Combat Team at Strakonice, Czechoslovakia, soon after Germany surrendered in 1945. If so, that commander might have been an Auburn man. Perhaps the explanation is as simple as coincidence. — Photo: Auburn Alumnews

This is a cool post my sister found, and all I have to say is WAR EAGLE!!!